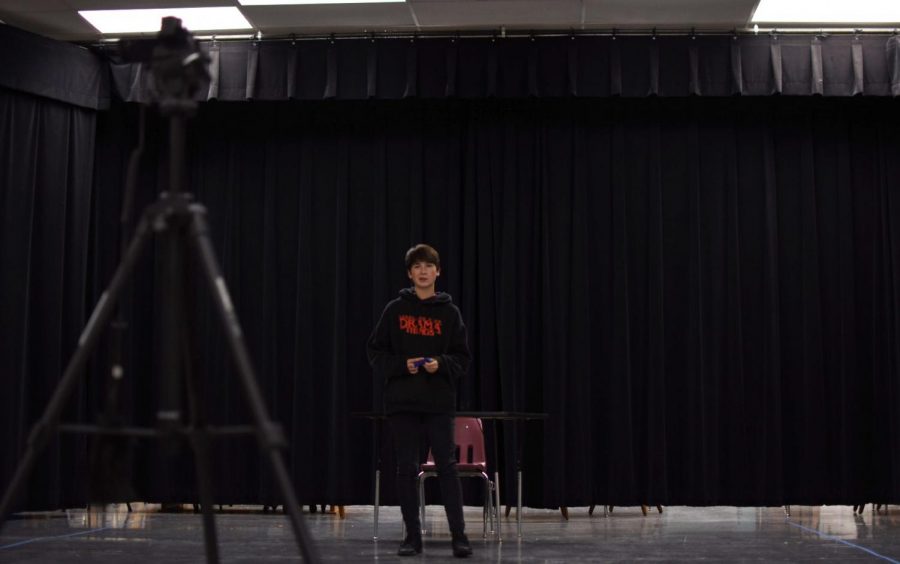 Throughout the week, students in the drama department have been practicing non-stop for their district competition by rehearsing lines, practicing make-up, making costumes or practicing lighting.

All students in Acting 2 and Stagecraft 2 are required to submit a piece for districts as their semester project. Any Acting 1 students are allowed to participate by putting together what is called Pantomime, which is coached by an Acting 2 student who had been in a Pantomime group the previous year. Students in Acting 1 and 2 and then Stagecraft are allowed to submit a piece.

There are 14 types of pieces that students can submit, four being tech pieces. Many of them are similar with slight differences.

The stagecraft students are able to submit a make-up design, create a costume, make a prop or make a set.

With everything happening this year, many things had to be modified regarding the judging and performing of pieces for Districts..

This year, the competition is online through video submissions. Students practice and prepare as much as they can and then they film their piece to send into the competition. Then there are about 30 judges from all over who each score about three videos, all from different categories.

With restrictions due to COVID, the ensemble and pantomime pieces, ones that have a group of people acting, have been reduced down to only two people being able to act together per group.

As the Acting teacher, Mrs. Knoll has been able to help students decide what they are going to perform, if it’s appropriate for schools and for the student.

She helps decide whether or not it is in their range of skill sets, if they have enough time and can even provide one of the many scripts that she has collected over the years if a student would like to use them.

Senior Ashtyn Howerton said that the week leading up to recording has been very stressful for the students due to having to practice over and over again to get it right. Mistakes have been made throughout the week, but once the piece is recorded there is a sense of accomplishment and relief for the students.  She said that after all the work, it’s really nice to see something you made or did in a category and be able to see it do well.

“It’s kind of heartfelt and touching in a weird certain way.”

This is the first year doing districts for freshmen KayCee Davis and she has practiced everyday after school for the week leading up to recording. For her, she is just happy to be able to participate in the one category available for Acting 1 students.

Since she was only allowed to do the pantomime category, she is excited for next year when she will be able to participate in an ensemble category. She says that with everything happening, this Districts competition has been interesting for everyone.

After the students record their pieces to submit, they have to wait until December5 when they get back their scores, and the top 10 percent in each category move on to the state competition to prepare to submit a video on December 18 and 19.