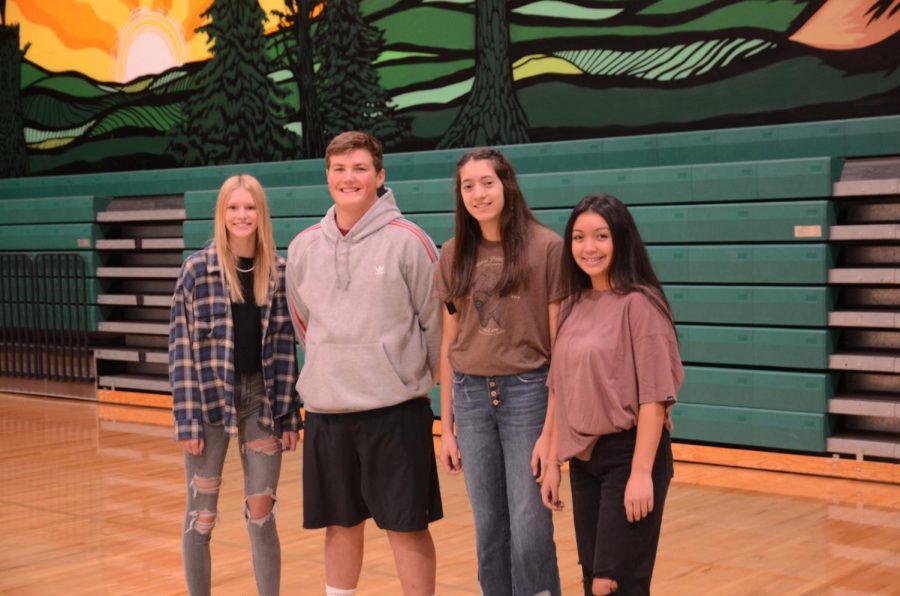 Landree Simon, Ziya Munyer, Olivia Zazuetta and Carter Vanek, who are all freshman on varsity sports

Being on varsity is a hard feat to accomplish for any sport. But being able to do that as a freshman is especially difficult. For some sports at Lakeland High School, it’s virtually impossible because there is a designated freshman team or the “C” team. But for volleyball and football, there are some talented freshmen who have earned their spot on varsity.

Ziya Munyer, Landree Simon, and Olivia Zazuetta are freshmen who have made appearances on the varsity volleyball team.

When asked about the difference between 8th grade and Varsity, Munyer states, “ The C-team and JV are more about skill development, and then varsity is all about competition and like fast tempo games and it’s kind of hard to jump right into that.”

Zazuetta stated, “It’s a big difference, the girls are bigger, taller, more experienced. You have to be able to keep up with the older girls to keep your spot.

The freshmen all thanked their coaches and teammates for the opportunity to play varsity as a freshman.

Carter Vanek is the only freshman on the varsity football team. Vanek should technically be on the freshman team or C-team, however was tasked with filling in on varsity due to a variety of injuries and sicknesses, which threatened the team’s depth. Vanek was originally going to be a JV player along with Ezra Benson and Dylan Scott.

When asked about what led up to pulling him up, head coach, Tim Kiefer stated, “The decision to pull had more to do with sickness and injury than it did anything, we needed some guy who could give us time. He’s doing such a fantastic job we felt like he was ready for it and could handle it.”

Vanek had originally been brought up to help with varsity practice and when he asked if he would play with them, Kiefer told him, “You sure won’t be playing with the JV for that much longer”. Vanek admitted that he was over the moon excited to play his first varsity game as a freshman against Post Falls.

“On varsity, the guys are much bigger, as well as competitive because they all are trying to get offers for college,” Vanek said.

The Lady Hawks volleyball team will play Tuesday, October 5th at 7 against the Coeur d’Alene Vikings.