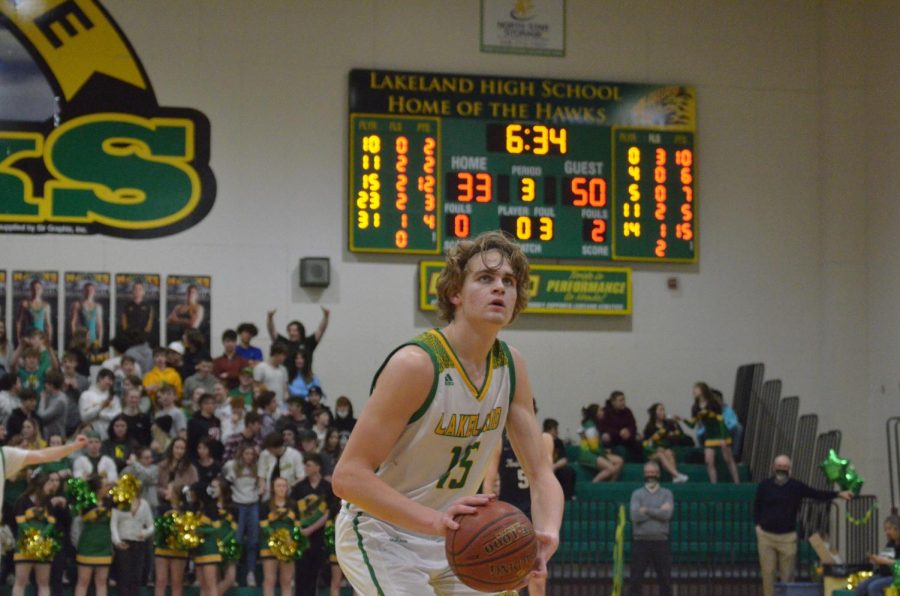 Lakeland Hawks (7-6) Noah Haaland and Bryce Henry score double-digit points in a shutout loss to the Lake City Timberwolves(12-4). The final being 79-50.

The third and final matchup between these two seasons was very anticipated, with Lake City winning both of the previous matchups. The Lakeland Hawks are looking to get a win against the team they have failed to defeat.

The COVID-19 protocols at games were lightened, and students were allowed to come and watch the games. With it being senior night, parents and students filled the stands to watch their student-athletes play and to celebrate the class of 2021.

Entering the game, the Hawks had Ammon Munyer out of the game due to wisdom teeth removal recovery. Having one of Lakeland’s starters out for the game was a bump the Hawks had to overcome to win the game.

At the start of the game, the Timberwolves got the Momentum going their way after making seven straight points, including a three and a block by Blake Buchanan. Point Guard Kolton Mitchell torched the Hawks in the first quarter by shooting five three-pointers.

The Hawks Abe Munyer got a leg injury at the beginning of the first quarter. Munyer was deemed out for the rest of the contest.

Lakeland fell behind quickly, with the score being 13-32 at the end of the first quarter.

During halftime, the Lakeland High School Cheer Team celebrated their seniors by giving them and their families flowers and gifts.

At the beginning of the 3rd quarter, Bryce Henry helped the Hawks eat away at the score by scoring 11 points, including a three-pointer. The Timberwolves got back to pace and scored 23 points in the 3rd quarter.

At the end of the game, the Hawks were only able to score 5 points in the 4th quarter, ending the game with a score of 79-50. Noah Haaland scored 12, and Bryce Henry scored 14 points in his efforts to win the game.

The Lakeland Hawks’ next game will be at Moscow against the Moscow Bears, Saturday at 2:00 pm.